In addition to being the birthday of my talented friend, Paul Tremblay, today is also the official release day for my second novel, The Fisherman. 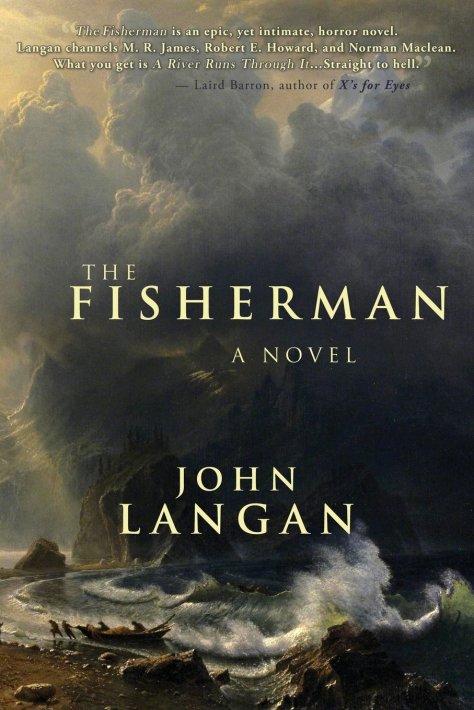 I’m extremely grateful for all the support I’ve already received, in the form of several very kind reviews.  I’ll put up links to them in another day or two.  In the meantime, I wanted to present an excerpt from the book:  the acknowledgments page.  While writing a novel is ultimately  a solitary activity, it doesn’t take place in a vacuum, and without a lot of help from a lot of people, this book would not have seen the light of day.  So:

When I started writing the story that would become this book, my wife was pregnant with our son.  He’s now twelve-going-on-thirteen.  Needless to say, that’s a long time from start to finish.  A lot has happened during that time, a lot has changed, but the love and support of my wife, Fiona, has remained a constant.  More than that:  as the years slid by, she was the one who said, every now and again, “You have to get back to The Fisherman.”  This book wouldn’t be here without her.  Thanks, love, for everything.

That twelve-going-on-thirteen-year-old has blossomed into quite the fisherman, himself these last few years, pretty much on his own.  (I basically sit nearby with a book and try to make comments that don’t sound too ignorant.)  David Langan’s technical advice helped a great deal in making the fishing-related portions of this narrative more accurate, while his love and all-around awesomeness made the rest of my life better.

My older son, Nick, and my daughter in law, Mary, and their trio of astounding kids, my brilliant grandchildren, Inara, Asher, and Penelope the Bean, have brought and continue to bring more joy into my life than I probably deserve.

It’s becoming a critical commonplace to say that we’re currently experiencing a resurgence in the field of dark/horror/weird/whatever fiction.  I happen to think this is true, but what matters more to me is the friendship so many of my fellow writers have offered me.  Laird Barron and Paul Tremblay have been the other brothers I never knew I had, even as their work has made me grit my teeth and tell myself to do better.  Sarah Langan, Brett Cox, and Michael Cisco are pretty good, too.

These last few years, I’ve continued to benefit from the kindness of writers whose work inspired my own.  Both Peter Straub and Jeffrey Ford have been unfailingly generous in their support and example.  While I am at it, let me raise a glass to the memory of the late, great Lucius Shepard, whose encouragement, praise, and fiction I continue to treasure.

My indefatigable agent, Ginger Clark, has been a champion of this book since I sent her its first three chapters a long, long time ago.  Every now and again, Ginger would send an e-mail encouraging me to finish the novel, and when at last I did, there was nobody happier.  I’m grateful for her continuing faith in me and my work.

As was the case with my previous novel, House of Windows, The Fisherman took a while to find a home.  The genre publishers said it was too literary, the literary publishers, too genre.  Thanks to Ross Lockhart and Word Horde Press for responding so immediately and enthusiastically to the book.

And a final, heartfelt thank you to you, the reader, for the gifts of your time and attention.  You make this writing life I have possible, and I’m grateful for it.

If I were going to add any names to this list, it would those of the writers who provided some very flattering blurbs for it:  Laird Barron, Adam Cesare, Michael Griffin, Stephen Graham Jones, Richard Kadrey, Victor Lavalle, Cameron Pierce, Pete Rawlik, and Paul Tremblay.  For about a day, their kind words made me more insufferable to my family than usual.  (“Do the dishes?  Do you know what Victor Lavalle had to say about my book?”)

I returned from the 2015 Necronomicon Providence with my older son and his family about to visit, and with my younger son and I about to test for our next promotions in Tang Soo Do.  As a result, it’s taken me a little while to sit down and set down my thoughts on the second of these conventions.  The short version is that I had an even better time at the 2015 Necronomicon than I did at the 2013 one, which I’m not sure I would have predicted possible.  I was very busy with programming, participating in a couple of readings and a number of panels.  There were also room parties.   In between, I spent time with a host of friends, signed numerous books, and wandered the dealers’ room.  I think I saw the convention developing in interesting directions.  The 2013 con focused more on Lovecraft and his set, with attention given to some contemporary horror writers (mostly those who fit best with HPL’s legacy).  The 2015 con seemed more evenly divided between HPL and his set and more recent horror writers.  It’ll be interesting to see what happens in 2017.

So:  some highlights from this convention:

–Thursday evening dinner with Brian Evenson, Paul Tremblay, Michael Cisco, Nikki Guerlain, Simon Strantzas, and Richard Gavin at a swanky restaurant whose name I’ve forgotten, but whose food was top-notch.  There was a great deal of laughter, and I received some good advice about a minor publishing quandary.  Afterwards, Cisco and Nikki and I wandered the streets of Providence until we came to a restaurant with outdoor seating, where we sat and discussed Gemma Files and Mike Griffin (which is to say, Cisco analyzed their fiction while I nodded and tried to keep up).

–Speaking of Paul:  Stephen King had just tweeted a very kind notice of Paul’s novel, A Head Full of Ghosts, that weekend, and all of us who love and respect Paul spent every available moment teasing him mercilessly about it.  He didn’t care, nor should he have.  It was nice to be able to spend time with one of your friends after he’s received some much-deserved praise from one of his heroes.  (Which reminds me:  have you read A Head Full of Ghosts?  If you have, good.  If not, what are you waiting for?)

–Speaking of Simon and Richard:  in addition to participating in panels and readings together, we had a nice, quiet dinner together on Saturday night at the local Mexican restaurant, where the waiter began our meal by expressing his regret over the news that actor Steven Seagal had just died (which, as it turned out, was not true).

–Then there were the room parties…  With my roommates, Bob Waugh and Eddy Eder, I had rented a suite at the convention hotel.  We invited a few people to stop by on Friday and Saturday nights.  They did.  They brought some more people, and also some very fine alcohol.  There was much good conversation.  I’m told the air in the room was at one point ninety-five percent Scotch, but I believe that’s an exaggeration; it couldn’t have been more than seventy-five, eighty percent, tops.  What I do know is that I can still stay up till four in the morning, if it’s to listen to Matthew Warren Richey read an excerpt from an autobiographically-inflected story and discuss the apocryphal Mormon view of Bigfoot.  I also know that, if you have to liberate extra glasses from somewhere in your hotel, Michael Cisco is the man for the job.

–Speaking of Eddy:  this was his second convention since beginning to focus on his weird artwork.  He was warmly and graciously received by the artistic community at the convention, who made room for him to display and sell prints of his work on one of their tables in the dealers’ room.  He also made contacts with some of the publishers who were there.  I was very happy for him.

–Speaking of artists:  I finally had a chance to meet and shake the hand of the uber-talented Michael Bukowski, who gifted me with an absolutely gorgeous compendium of his Nyarlathotep illustrations.  I was as bowled-over by his generosity as I was his talent, and that’s saying something.

–Speaking of publishers:  I had good conversations with both Derrick Hussey of Hippocampus Press, about my third collection, forthcoming in early 2016, and Ross Lockhart, of Word Horde Press, about possible future projects.

–And I met and spoke to so many talented writers, I don’t know where to begin.  I had the chance to hang out and have lunch with Dave Zeltserman, whose The Caretaker of Lorne Field is a recent favorite.  We talked about the joys of martial arts for the aging male body.  Anya Martin made me a gift of one of her late father’s books, which was very moving and for which I’m very grateful.  Scott Nicolay gave me a copy of his beautifully-designed chapbook, After.  Marc Fitch gave me a copy of his novel, Paradise Burns, with a very flattering inscription.  I was able to purchase copies of Matthew Bartlett’s latest collection and chapbook, and to spend some time talking with him and his wife.  I was able to get the ferociously-talented David Nickel to sign copies of his books for me, and to talk with him about the joys of writing fiction that’s too literary for the genre imprints, and too genre for the literary imprints.  I talked to Mike Griffin about his upcoming collection.  Justin Steele and I cursed each other out.  The Miskatonic Musings guys caught up with me for a brief interview.  Joe Pulver took me aside to talk to me.  Cisco had me convinced to spend a lot of money at one table in the dealers’ room, and I would have, if that bookseller had taken credit cards.

–What else?  Jack Haringa, floating in a cloud of nicotine, snark, and Scotch.  Matt Burke, whose art I like a great deal.  Michael Wehunt, who’s a very interesting writer.  Jeff Thomas, signing my books.  Ramsey Campbell, always at one end of a line of people waiting for him to sign their books.  Michael Marshall Smith, glimpsed across a room but, sadly, not spoken to.  Cody Goodfellow looking like Moses.  Or Karl Marx.  Or that guy in The Professor and the Madman.  The madman.  Getting to shake Henrik Moller’s hand and tell him how much I enjoyed his short film, Inviting the Demon.  (Really, it’s very good:  go check it out on YouTube.)  Watching Leeman Kessler chase his young daughter, and imagining for a moment it’s Lovecraft playing with his child.

So, well done, all those responsible for and involved with the staging of this convention.  I haven’t been to a better one this year.

ETA:  And shortly after I post this report, I realize I forgot to mention meeting the ferociously talented Damien Angelica Walters, and Phil Gelatt, and Jason Brock, and Mike Davis, and Steve Mariconda, and Alex Houston, and Dan Mills, and I also forgot to mention signing books for any number of folks who were kind and gracious enough to ask me to.  Sorry about that, folks!