My birthday yesterday included a lovely lunch with my Mom and her fiance at the redoubtable Port Ewen Diner, and an utterly splendid dinner at the Yum Yum noodle bar in Kingston, followed by a cake from the Cake Box bakery.  It also included a surfeit of birthday wishes via e-mail, Facebook, and Twitter, not a few of which included images of Godzilla, which is always a good thing.  Rather than spend the afternoon typing replies, I thought I’d offer my sincerest thank you here, and by way of expressing my gratitude, a sneak-peek at the first chapter of “Sefira,” the original novella that will be included in my upcoming collection, Sefira and Other Betrayals (which is up for pre-order, just in case, you know…).  You all are the best.

Lisa looked in the rearview mirror and saw that her eyes had turned black.

The process had started a week ago, her second day on the road.  She’d been washing her hands in the ladies room of a rest stop on I-80, somewhere in the sprawling middle of Pennsylvania, and when she glanced at the mirror for a spot-check, saw the black rings around her pupils.  Heart whacking against her chest, she leaned forward.  Her pupils were rimmed by black dark as squid ink.  She drew closer.  The black appeared to be moving, flowing sluggishly out of her pupil onto the green expanse of her iris.  She pressed her nose against the mirror, trying to distinguish more detail, but her eyes teared, her vision blurred.  Reflection fractured, she pushed away and hurried out of the rest room.  She forgot to dry her hands, which she didn’t notice until she was gripping the wheel of her Accord.

For the next five hours, as evening faded into night, and she continued on 80, until the fatigue drawing her lids down forced her to pull off at another rest stop, outside Pittsburgh, Lisa checked her vision every ten minutes, closing first the left eye, then the right, in an attempt to determine the full extent of whatever was happening to her.  As far as she was able to tell, the change to her eyes was chiefly cosmetic.  Her vision didn’t seem any worse, her eyes more sensitive to light; nor was there any pain.

Which didn’t make what happened to them over the next seven days any less unsettling.  Days two and three brought the steady darkening of her irises, until even she could no longer say where her pupil ended and her iris began.  On day four, another mirror, this one in a Day’s Inn in Paducah, Kentucky, showed what appeared to be tiny black clouds churning over her eyes.  When she entered the bathroom, she was considering another hour in bed, the prospect of which evaporated as she studied this latest development.  The blackness that had spread across her irises was venting up into the humor beneath her corneas, like smoke rising from some internal conflagration.  As before, she couldn’t detect any impairment to her vision, so after her shower, she slid on the Ray-Bans she’d grown so used to her reflection wearing that it looked more than naked, it looked incomplete, without their chunky tortoise frames, and headed for the car.

At several points, when she saw the white “H” indicating a hospital off the next exit, Lisa debated turning from whatever highway the Honda’s wheels were humming across and steering straight for the emergency room.  It wasn’t a question of whether whatever was changing in her was something to be concerned about.  How could it be anything but?  It was a matter of being one, at most one and a half days behind Sefira, and a detour to the E.R. would consume days, because they would have to admit her, and run tests, and treat her—try, at least.  What would happen when their efforts failed, as she guessed they would?  Specialists would be called in, experts consulted, she would be transferred to a regional medical center, a university hospital.  They wouldn’t be able to let her go, would they?  Not that she blamed them.  They wouldn’t want to risk her infecting others with her disease, whose long-term effects might be more severe than she’d yet experienced.

And all the while, Sefira would keep moving farther and farther away, first—assuming Gary was correct—to the motel in Montana, and after that, who could say?  There was the chance—slim, but not so much it could be discounted entirely—that she would overtake Sefira, catch her unawares at some all-night truck stop, surprise her on her way back to that ridiculous van.  Even if, as appeared likely, Sefira maintained her lead, Lisa would arrive in time to confront her at the motel.  According to Madame Sosostris, she would rest there for at least three days, possibly a week.  All of that, however, was contingent on Lisa keeping her foot pressed on the gas pedal, the car in 5th.  Lose a few days, lose Sefira.

On day five, though, she’d awakened with her eyes burning.  She stumbled past the frowns of the counter staff at the McDonald’s in whose parking lot she’d been sleeping, into the bathroom.  Her sunglasses clattered in the sink.  The woman in the mirror might have had the mother of all hangovers, or a virulent case of pinkeye, except that the blood vessels crisscrossing the whites of her eyes were black, as if someone had drawn on her sclerae with a fine-tipped pen.

Throat tight, she splashed cold water in her eyes, which helped the burning for a moment, but had no effect whatsoever beyond that—as if it would have, as if she could have cleaned her eyes of whatever was staining them.  She bought a bottle of sterile saline and a bottle of Visine at the CVS next to the McDonald’s, then returned to the restaurant’s bathroom to rinse her eyes with the saline and douse them with the Visine.  The treatment brought some measure of relief.  She ordered a large coffee to go and went, back on the road.  For the rest of the day, her eyes were too dry, gritty.  Her eyelids scraped across them every time she blinked.  She had to pull over what felt like every ten minutes to use the Visine.  She was annoyed.  The time it took her to roll to a stop, tilt her head, pull down her lower lid, and squeeze the eye drop in was time slipping through her fingers.  Immediately under the irritation, like dark water under a scrim of ice, was fear, anxiety that the process underway in her eyes had entered a new phase, that this was the start of something worse, something she’d missed whatever window she’d had to address.  The fear seeping into her annoyance, Lisa went so far as to take the next exit that advertised a hospital.  She navigated within sight of it, only to have an emotion she couldn’t name make her foot press the gas, her hands steer for the signs that led back to the interstate.

When her eyes felt better the next morning, she told herself that she’d made the right decision.  The black capillaries crosshatching the whites of her eyes had multiplied to the point the whiteness seemed the oddity, the result of a child’s careless coloring.  Within another twenty-four hours, only a few, pale spots would be scattered across her eyes, like spattered paint.  By then, she would have crossed into Montana, and whatever concern had swelled at the penultimate phase of her eyes’ transformation would be swallowed by the sensation that jolted her when she saw the sign welcoming her to Big Sky Country.  It was as if the yellow line delineating the state’s margin in her frayed and dog-eared Rand McNally were an actual border, as if in crossing it, she had passed into something else, analogue to the shift in the map’s colors from the blue edge of Wyoming to the white expanse of Montana.  It was like having had a bad cold, nose blocked, head fuzzy, and then taking a drug that cleared the symptoms instantly.  The landscape streaming by her window wasn’t especially different from what had flown past the last few hours in Wyoming—land like rumpled sheets on a bed, thick with yellow grass, the occasional house or gas station or farm like a set for a movie—yet it seemed brighter, as if lit from within by millions of tiny, brilliant lights.

This impression had not abated when a glance in the rearview mirror showed her eyes completely black.  Despite everything, the catastrophe that was the last ten days, what Gary had done and what had been done to him, what she intended for Sefira with the butcher knife wrapped in a towel and stuffed under the spare tire, the ongoing changes to her, Lisa was startled, jerked the car to the left, earning an angry blat from the eighteen-wheeler rumbling past her.  She steered away from the truck, back into her lane.  The difference in her eyes was of the slightest degree, but she could not stop staring at them.  After a second truck, this one a pickup behind her, honked because she had failed to notice herself slowing from seventy to forty-five, she decided it was time to pull off.  She hoped there was a McDonald’s at the next exit.  The drive-thru window meant she didn’t have to worry about the teenager working the register staring at her because she was wearing her sunglasses inside.

Not to mention her mouth:  there was no disguising that, now. 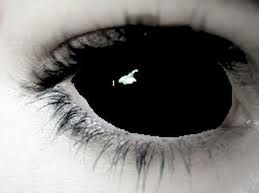 It’s Laird Barron’s birthday today.  As I never tire of saying, Laird’s one of the writers who keeps me honest:  whenever I read his latest story, my admiration is invariably mixed with the thought, “Damn, I’m going to have to do better.”  He’s also one of my closest and dearest friends, and I love him and hope he has a great day.