Christopher Buehlman’s The Lesser Dead is another favorite (recent) read.  It’s a vampire novel, set in New York City during the 1970’s, about a group of vampires living in the subway system who encounter a terrifying threat.  It was my bedtime reading for a few nights, and it kept me awake and reading each and every one of them.  In large part, this was due to its narrative voice, which is simultaneously streetwise and lyrical, ranging back and forth among the histories of its narrator and his fellow vampires.  There’s so much in this novel that feels as if it shouldn’t work:  from the first-person vampire narrator, to the vampires dwelling in the subways, to vampires being stalked by a predatory creature, to a twist ending, but Buehlman pulls all of it off with verve and panache.  It’s as if he set himself the challenge of taking these familiar elements and doing something fresh and new with them.  It’s a cliche of writing instruction that there’s no idea so old and so worn that a talented writer can’t do something interesting with it, based on his accomplishment here, Christopher Buehlman is talented, indeed.

My longstanding friendship with the Honey Badger is a matter of (by now, frequent) public record.  For me, it began in admiration for Laird’s fiction, and while we’ve discovered many shared passions, undertaken a few insane adventures together, I always come back to his fiction, and how much I enjoy it.  I’ve written reviews of his work (The Imago Sequence, in an early issue of Dead Reckonings, The Croning, in the Los Angeles Review of Books) and I expect I will again.

This isn’t so much a review of his latest novella, X’s for Eyes, as it is an appreciation of it.  I suppose a capsule summary of the story would go something like, A pair of brothers, scions of an American dynasty, are initiated into the true nature of their inheritance.  Except that this would leave out the space probe, and the supercomputer, and the assassins, and the pyramid in the ice, and the other world, and the floating godhead, and all manner of other things.  As the surplus of details I’ve provided suggests, the book is stuffed full, a Big Bang of a narrative, throwing out characters, secret history, cool vehicles, weird monsters, and exotic locales red-hot.  It moves briskly, its narrative voice confident and cheerful.  Its heroes undergo thrilling adventures, encountering nefarious villains, narrowly escaping certain doom.  The story reads like a return to the pulp adventure tradition of Doc Savage and The Shadow, with a bit of Robert Howard and H.P. Lovecraft thrown in, too–and there’s a moment in the story when this is revealed to be very deliberately the case.  For all its good-humored mayhem, though, there’s an underlying melancholy about the novella’s boy-heroes, and, when they glimpse one of their possible fates, a real sense of dread that is not undone by the story’s end. 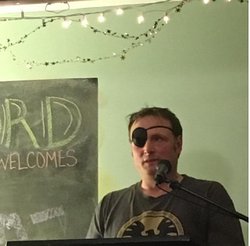 Laird reading at WORD, this past October.

A real danger for any artist worth the name, I think, is repetition.  I don’t mean the refining of a particular approach to their art–what I think you find in Cézanne’s painting, say–I mean the cookie-cutter reproduction of what they’ve done before.  It would be easy enough for Laird Barron to have remained where he is, consolidate the gains of his first three collections and two novels and produce more of the same.  As those of us who have been reading his more recent short fiction have seen, however, this is not the path he’s chosen.  Instead, he’s opted to experiment, moving in new and strange directions.  At the same time, much of what he’s writing now connects back to those earlier stories, but does so in a way that opens up new dimensions to them.  There are more stories about the Tooms brothers promised, to which I’m looking forward.  I’m as excited to see where Laird’s fiction takes him next.